The sacred shrine of Yamunotri, source of the river Yamuna, is the westernmost shrine in the Garhwal Himalayas, perched atop a flank of Bandar Poonch Peak (3615 m) & situated opposite to Gangotri. 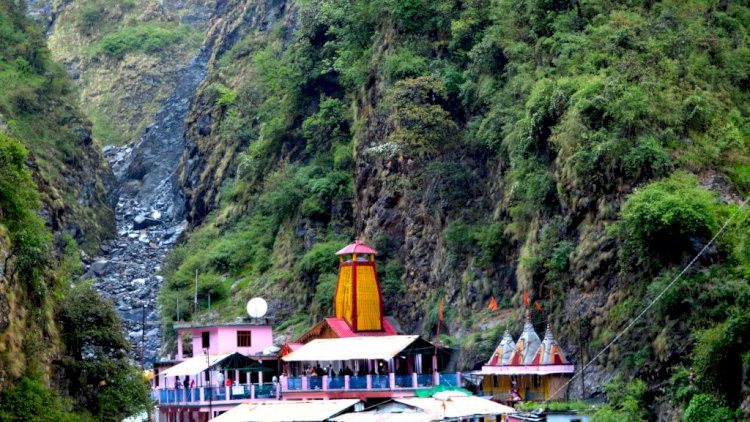 The sacred shrine of Yamunotri, source of the river Yamuna, is the westernmost shrine in the Garhwal Himalayas, perched atop a flank of Bandar Poonch Peak (3615 m) & situated opposite to Gangotri. The actual source a frozen lake of ice & glacier (Champasar glacier) located on the kalind mountain at the height of 4421 m above sea level, about 1 km further up, is not frequented generally as it is not accessible and hence the shrine has been located on the foot of the hill. The tiny Yamuna has icy cold water and its absolute innocence and the infantile purity heightens that deep feeling of reverence, Yamunotri for the devout.

The temple of Yamuna is on the left bank of Yamuna constructed by Maharaja Pratap Shah of Tehri Garhwal. The deity is made of black marble. The Yamuna like Ganga has been elevated to the status of divine mother for the Hindus and has been held responsible for nurturing and developing the Indian civilization.

According to the legend ancient sage Asit Muni had his hermitage here. All his life, he bathed daily both in Ganga and Yamuna. Unable to go to Gangotri during his old age, a stream of Ganga appeared opposite Yamunotri for him.

The temple and the place opens every year on the auspicious day of the akshya-tritya, which generally falls during the last week of April, or the first week of May. The temple always closes on the sacred day of Diwali mid- Oct. - 1st week of Nov., with a brief ceremony, the temple staff return to their villages and for the rest of the time the valley is gripped in no man silence and covered with white sheet of snow. With melting of snow next summer, temple re-opens to blissful happiness of thousands of visitors again.

The daughter of the Sun god, Surya and consciousness, Sangya the birth place of the Yamuna is the Champasar Glacier (4421 m). Just below the Banderpoonch mountain. The mountain adjacent to the river source is dedicated to her father, and is called Kalinda Parvat. Kalinda being another name of for Surya. Yamuna is known for her frivolousness, a trait that she developed because as per a common story - Yamuna's mother could never make eye contact with her dazzling husband.