The Ministry of Road Transport & Highways has introduced a new registration mark that is called Bharat series (BH-Series).

The move to introduce BH Bharat Series comes in the context of several citizen-centric steps and an IT-based solution for vehicle registration taken by the government. 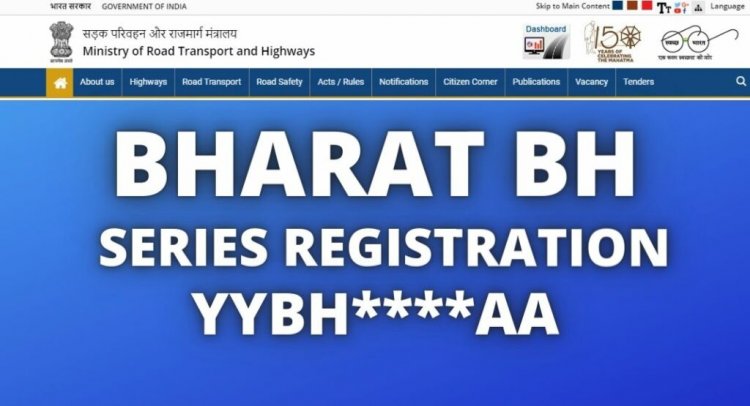 The Ministry of Road, Transport and Highways recently announced a new Number Series called Bharat Series marked by ‘BH’ in order to facilitate seamless transfer of vehicles. The Transport Ministry has stated that a vehicle bearing this registration mark shall not require the assignment of a new registration mark when the owner of the vehicle shifts from one state to another.

What is BH Number Series?

A BH number series is a newly introduced number series for vehicle registration across India specifically meant for those vehicle owners who shift from one state to another on a regular basis due to their transferable nature of job. The BH signifies Bharat and will replace the state letters in the number plate denoting the state of vehicle registration, like UP or DL.

The BH series number plates will be applicable for private vehicles as of now which means these plates will have white background with black numbers. One has to pay road tax in regular vehicles for 15 years, while for BH series, the road tax will be paid only for 2 years, post which, owner can move to another state and pay applicable tax of the new state.

Who is Applicable to Apply for BH Series?

The vehicle registration facility under ‘BH’ series will be available to defence personnel, employees of Central government, state governments, Central/state PSUs and private sector companies/organisations, which have their offices in five or more states/Union Territories since employees these services have a transferable job moving from one state to another ever 2-3 years.

How to Read Number Plate?

Station relocation occurs with both government and private sector employees. Such movements create a sense of unease in the minds of employees with regard to transfer of registration from the parent state to another state, as under Section 47 of the Motor Vehicles Act, 1988, while a person is allowed to keep the vehicle for 12 months in any state other than the state where the vehicle is originally registered, new registration with the new state-registering authority has to be made within 12 months.

With the new BH series, the motor vehicle tax will be levied for two years or in multiple of two. This scheme will facilitate free movement of personal vehicles across any state in India upon relocation to a new state.

How to Apply BH Series Plate?

Step 1: The vehicle owners will apply for a new plate at the origin RTO of the vehicle purchase and will provide the government issued ID to prove the employment.

Step 2: Owner will pay road tax for only 2 years or in multiple of two, like 4 years or 6 years depending on the length of their tenure in a state where the car is purchased.

Step 3: Earlier, a ‘No Objection Certificate’ from the parent state for assigning a new registration mark in another state was needed. With new BH series, and no state involved, no NOC is needed and the owner can directly apply for re-registration in the new state.

Step 4: The tax of said state will now be applicable and owner can wait for the previous tenure to get over for new registration.

Step 5: However, if the new owner fails to renew the RC in said time frame, a fine will be applicable as per MV Act if Traffic Police ever catches the vehicles.

Step 6: A refund is also applicable if the owner wants to pay road tax of new state and still has time left from previous state. In that case, an application for a refund of the road tax in the parent state has to be filed.

India extended the suspension of international commercial passenger flights till...