In fresh guidelines, the home ministry also allowed the resumption of app-based cab services; gave permission to the functioning of all shops, markets and commercial establishments except those in malls. 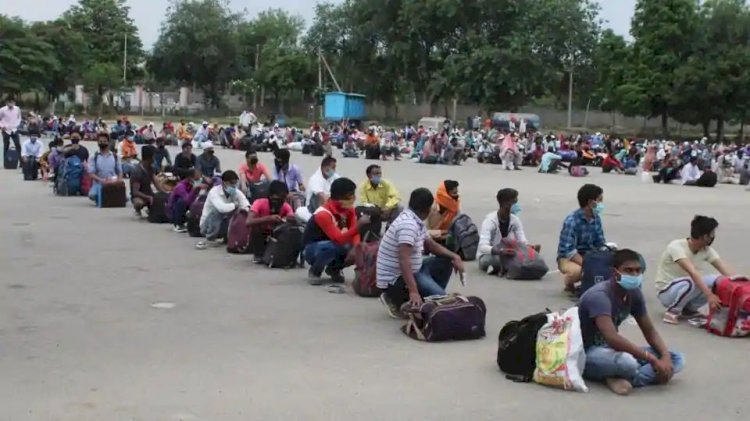 The government on Sunday lifted several stringent curbs, including that on interstate travel and some local transport such as buses, and announced that state governments will grade zones based on the prevalence of coronavirus disease (Covid-19) cases, while it also extended the nationwide lockdown imposed in March-end to stop the spread of the contagion till May 31.

In fresh guidelines, the home ministry also allowed the resumption of app-based cab services; gave permission to the functioning of all shops, markets and commercial establishments except those in malls; and eased curbs on private offices that were previously allowed to function with 33% staff strength. 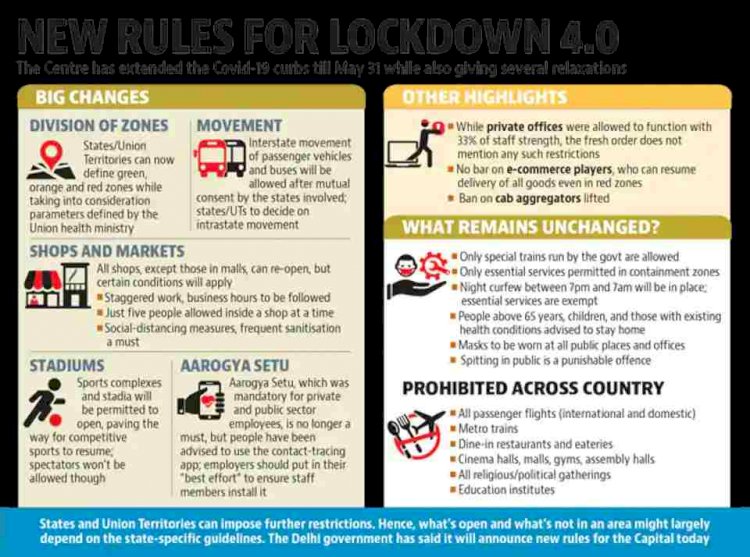 Stadiums and sports complexes were allowed to open for the first time since March 25 — when the lockdown was first imposed — but spectators will not be permitted inside.

The two significant steps that stood out were the conditional approval to interstate movement of passenger vehicles and buses with “mutual consent” of the states and the Union Territories (UTs) involved, and the transfer of power to states for defining red, orange and green zones that have been instrumental in the strategy for imposing area-specific curbs in the previous phase of the lockdown.

within their territories, and lifted the ban on cab aggregators such as Ola and Uber even in areas with relatively higher cases.

In lockdown 3.0, interstate travel was a banned activity, except in special cases such as the transport of stranded migrants by bus. Also, it was the Centre that came out with two lists — on April 15 and on May 1 — identifying red zones (with maximum Covid-19 cases), orange zones (with fewer infections) and green zones (Covid-19-free areas), though several states expressed dismay over the process.

“Under the new guidelines, States and Union Territories (UTs) will now delineate Red, Green and Orange zones taking into consideration the parameters shared by the Health Ministry,” a press statement by the government said. These zones can be a district, or a municipal corporation, or even smaller administrative units such as sub-divisions.

The government’s statement added that within red and orange zones, “containment and buffer zones will be as demarcated by the local authorities, after taking into consideration the Health Ministry guidelines”. No relaxations spelt out in the federal guidelines will be applicable to these areas, which will have strict perimeter control and where only essential services will be allowed.

In the fresh guidelines, the government also advised people to use the contact-tracing Aarogya Setu app, and said employers should put in their “best effort” to ensure staff members install it. Earlier, the app was a must for people working in private and public sectors.

Metro train services; domestic and international passenger flights; schools and colleges; hospitality services; cinema halls; shopping malls and dine-in restaurants; and religious and political gatherings will continue to be prohibited across the country. Only special trains — a pair of 15 premium trains and those ferrying migrants to their homes — will run in this period.

Also, the ban on non-essential travel between 7pm and 7am will continue. Spitting and consumption of liquor, gutkha and tobacco in public places continue to be banned.

“All other activities will be permitted, except those which are specifically prohibited,” the guidelines for the fourth phase of lockdown said.

“Further, States/UTs, based on their assessment of the situation, may prohibit certain other activities in the various zones...,” the order said, indicating relaxations could largely be dependent on state-specific rules.

The opening of marketplaces, albeit in a staggered manner, is expected to help put economic activities, stalled by the unprecedented lockdown, back on track to some extent. Another major decision in that direction was the decision to lift curbs on establishments and factories that were restricted to work with just one-third of their staff from office. However, firms were advised to allow their employees work from home to the extent possible. The guidelines reiterated that wearing of mask was mandatory in public places and offices.

States and UTs were asked to make sure that the movement of cargo trucks or medical personnel was not hindered.

The nationwide lockdown, the first phase imposed on March 25 for 21 days, has been extended thrice. The second and the third phases of the curbs – starting April 15 and May 4 — lasted 19 days and 14 days, respectively. On March 25, India had 657 Covid-19 cases, which have increased to 95,656 infections as of Sunday.

After the central guidelines were issued, Union home secretary Ajay Bhalla wrote to all states, asking them to ensure strict compliance of the lockdown rules.Officials across states held emergency meetings, and many of them said they will come up with their own guidelines by Monday.

Amir Subhani, Bihar’s additional chief secretary of the home department, said the state will adhere to the home ministry order.

While Madhya Pradesh, Rajasthan and West Bengal were likely to announce their guidelines on Monday, Punjab, too, will hold a key meeting to take a call on the rules dictating the terms for lockdown 4.0.

Meghalaya and Nagaland announced that the existing restrictions will continue for the next round as well.

“In Meghalaya, keeping in mind the inflow of Meghalaya citizens from different parts of the country, we have decided to maintain the current restrictions and no further relaxation are planned as of now. If (there are) any changes, it will be notified accordingly,” Meghalaya chief minister Conrad Sangma tweeted.

Lockdown 4.0 guidelines: List of top 10 activities allowed till May 31