The Starlink app guides how to install the Starlink receiver dish, as well as connection status (including signal quality), a device overview for seeing what’s connected to your network, and a speed test tool. 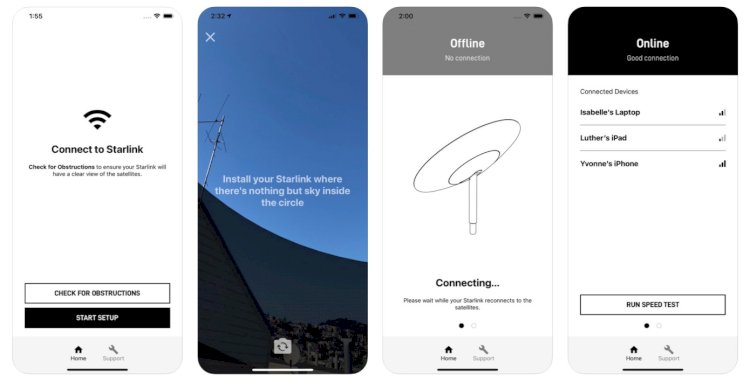 SpaceX has debuted an official app for its Starlink satellite broadband internet service, for both iOS and Android devices. The Starlink app allows users to manage their connection — but to take part you’ll have to be part of the official beta program, and the initial public rollout of that is only just about to begin, according to emails SpaceX sent to potential beta testers this week.

The Starlink app guides how to install the Starlink receiver dish, as well as connection status (including signal quality), a device overview for seeing what’s connected to your network, and a speed test tool. It’s similar to other mobile apps for managing home WiFi connections and routers. Meanwhile, the emails to potential testers that CNBC obtained detail what users can expect in terms of pricing, speeds, and latency.

The initial Starlink public beta test is called the “Better Than Nothing Beta Program,” SpaceX confirms in their app description, and will be rolled out across the U.S. and Canada before the end of the year, which matches up with earlier stated timelines. As per the name, SpaceX is hoping to set expectations for early customers, with speeds users can expect ranging from 50Mb/s to 150Mb/s, and latency of 20ms to 40ms according to the customer emails, with some periods including no connectivity at all. Even with expectations set low, if those values prove accurate, it should be a big improvement for users in some hard-to-reach areas where service is currently costly, unreliable, and operating at roughly dial-up equivalent speeds.

In terms of pricing, SpaceX says in the emails that the cost for participants in this beta program will be $99 per month, plus a one-time cost of $499 initially to pay for the hardware, which includes the mounting kit and receiver dish, as well as a router with WiFi networking capabilities.

The goal eventually is to offer reliable, low-latency broadband that provides a consistent connection by handing off connectivity between a large constellation of small satellites circling the globe in low-Earth orbit. Already, SpaceX has nearly 1,000 of those launched, but it hopes to launch many thousands more before it reaches global coverage and offers general availability of its services.

SpaceX has already announced some initial commercial partnerships and pilot programs for Starlink, too, including a team-up with Microsoft to connect that company’s mobile Azure data centers, and a project with an East Texas school board to connect the local community.