Xiaomi’s latest flagship killer, at least claimed to be, Mi 11X will be available for pre-orders in the country starting today. Xiaomi had launched the Mi 11X in India alongside the Mi 11 Ultra and Mi 11X Pro last week. 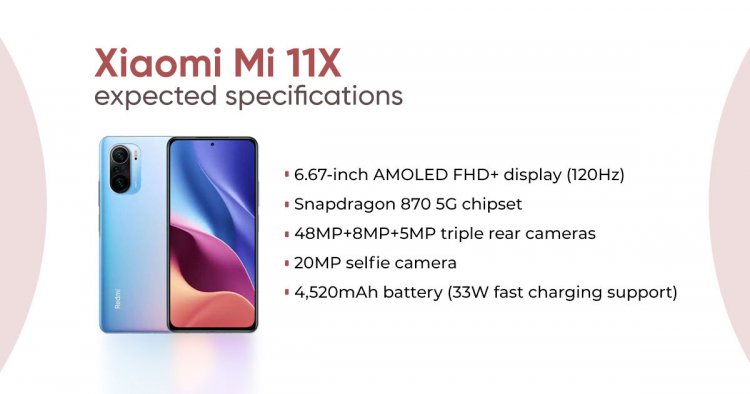 Xiaomi’s latest flagship killer, at least claimed to be, Mi 11X will be available for pre-orders in the country starting today. Xiaomi had launched the Mi 11X in India alongside the Mi 11 Ultra and Mi 11X Pro last week. The Mi 11X is the most affordable of the three smartphones even though it comes with a Qualcomm Snapdragon 8-series processor, 120Hz OLED panel and dual speaker system. The smartphone was launched in China as the Redmi K40 but has been re-branded for the Indian market.

The Mi 11X competes against the OnePlus 9R, Vivo X60 series and more recently launched iQOO 7. All these smartphones come with the same Qualcomm Snapdragon 870 processor which is the chipset for affordable flagship smartphones of 2021. As the phone goes on pre-order, here is everything you need to know.

For optics, the Mi 11X a 48-megapixel Sony IMX582 sensor, an 8-megapixel ultra-wide camera with 119-degree field of view and a 5-megapixel macro camera with 2X zoom. The front has a 20-megapixel selfie shooter. The smartphone packs a 4,520mAh battery with 33W fast charging and runs MIUI 12 based on Android 11.

If you are running an old mid-range smartphone and looking for a powerful upgrade, then the Mi 11X makes for a smart buy. It has some impressive features for the price. The chipset is very capable and delivers a consistent performance. The display is also nice and ideal for streaming content. One of the things that work in favour of Mi 11X is its slim form factor.

Overall, the phone has a familiar but sophisticated design, an excellent E4 screen and delivers a good performance.

If you are the in the market for good cameras, then you can give the Mi 11X a pass. The main camera is average and inconsistent. The other two lenses do a decent job but capture noise in lowlight conditions. The same goes for the front camera. If camera is your priority, then do check out the OnePlus 9R and the Vivo X60.

Banks to remain closed for up to 12 days in May in several states; Check full holiday...

Covid-19 vaccine registration now open for all adults: Here’s how to register