Reliance Industries, the most valued firm in India and parent entity of Jio Platforms and Reliance Retail, plans to expand JioMart 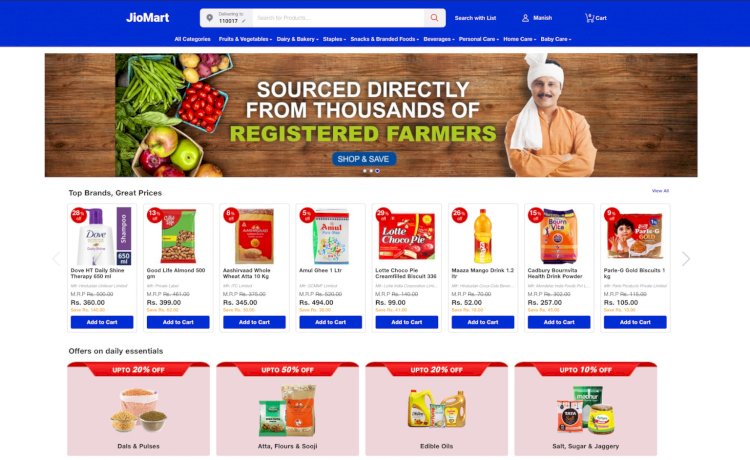 The rationale behind the deluge of dollars flooding into billionaire Mukesh Ambani’s  Reliance Jio Platforms is beginning to become more clear as his e-commerce venture JioMart starts rolling out to more people across India.

Before the expansion on Saturday, the service was available in three suburbs of Mumbai. The service now includes perishables such as fruits and vegetables, and dairy items in addition to staples and other grocery products as it makes its pitch to Indian households across the country.

Ambani’s Reliance  Jio Platforms, which has raised more than $10 billion in the last month by selling a roughly 17% stake, has amassed over 388 million subscribers, more than any other telecom operator in the country.

Earlier this week the American e-commerce giant entered India’s food delivery market to challenge the duopoly of Prosus Ventures-backed Swiggy and Ant Financial-backed Zomato. Amazon is making a massive hiring push in India, and is looking to hire close to 50,000 seasonal workers to keep up with the growing demand on its platform.

Meanwhile, Ambani’s Reliance Retail, founded in 2006, remains the largest retailer in India by revenue. It serves more than 3.5 million customers each week through its nearly 10,000 physical stores in more than 6,500 cities and towns.

JioMart may have Amazon and Flipkart  in its sights, but in its current form, however, the company is going to be more of a headache for Grofers  and BigBasket, the top grocery delivery startups in India.

Reliance Industries,  the most valued firm in India and parent entity of Jio Platforms and Reliance Retail, plans to expand JioMart to more than a thousand districts in a year and also widen its catalog to include electronics and office supplies among a variety of other categories, a person familiar with the matter told TechCrunch. A Reliance Jio  spokesperson declined to comment.

The expansion to more cities comes a month after JioMart launched its WhatsApp  business account, enabling people to easily track their order and invoice on Facebook -owned service.

Facebook announced it would invest $5.7 billion in India’s Reliance Jio Platforms last month and pledged to work with the Indian firm to help small businesses across the country. JioMart’s WhatsApp account currently does not support the expanded regions.

Mukesh Ambani, India’s richest man and the chairman and managing director of Reliance Industries, first unveiled his plan to launch an e-commerce platform last year. In a speech then, Ambani invoked Mahatma Gandhi’s work and said India needed to fight another fresh battle.

A handful of firms have attempted — and failed — to launch their e-commerce websites over the years in India, where more than 95% of sales still occur through brick and mortar stores. But Ambani is uniquely positioned to fight the duopoly of Amazon and Walmart’s Flipkart — thanks in part to the more than $10 billion in investment dollars the company recently raised from KKR, Facebook, Silver Lake, Vista Equity Partners, and General Atlantic. In addition to scaling JioMart, the fresh capital should also help Ambani repay some of Reliance Industries’ $21 billion debt.

“We have to collectively launch a new movement against data colonization. For India to succeed in this data-driven revolution, we will have to migrate the control and ownership of Indian data back to India — in other words, Indian wealth back to every Indian,” Ambani said at an event attended by Indian Prime Minister Narendra Modi .

Now you can withdraw money from an ATM without using a...