Tata Sky Broadband is offering free extra months of usage for customers who opt for the annual plans in select cities. 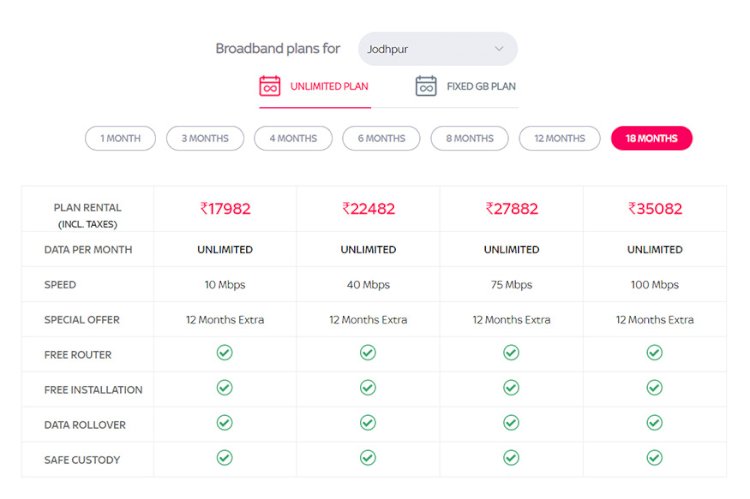 It seems that Tata Sky is also getting ready to tackle Reliance Jio’s upcoming fiber broadband service. A report confirms that Tata Sky Broadband has started offering additional months of usage to its customers when they opt for the annual payment plans. The offer is notably available in select cities only and while the extra validity is available on unlimited plans, some cities are also getting the offer on fixed data plans.

Tata Sky Broadband’s website confirms that users in Bengaluru, Chennai, Pimpri Chinchwad, and Pune will get 3 months of extra usage when they opt for the 12 months for any of the unlimited or fixed data plans. Subscribers in Hyderabad will get six months of free extra usage when customers go for any of the unlimited plans for 12 months. The city of Jodhpur probably gets the best advantage as customers can get free 12 months of additional usage on the 18-month plans which is unlike any of the plans offered by the company in any other city.

Back in May, the company had announced its plans to expand its reach by offering its service to Lucknow, Navi Mumbai and Surat. Currently, the company is offering its services in 21 cities. Tata Sky's unlimited plans come with a FUP (fair usage policy) depending on the plan you choose. Speeds are dropped to 1Mbps once the user exhausts the data. It does provide data rollover service, so you can use the remaining high-speed data allowance from the previous month.

Parineeti Chopra Looks Dishevelled And Bloodied in 'The Girl On The Train' First...

Your iPhone is Going to Change Today With iOS 13, And Here...