Indian Railways’ isolation coaches to be deployed at 215 railway stations

The coaches will be spread across all major hotspots in India and cover both the big cities as well as rural, far-off places 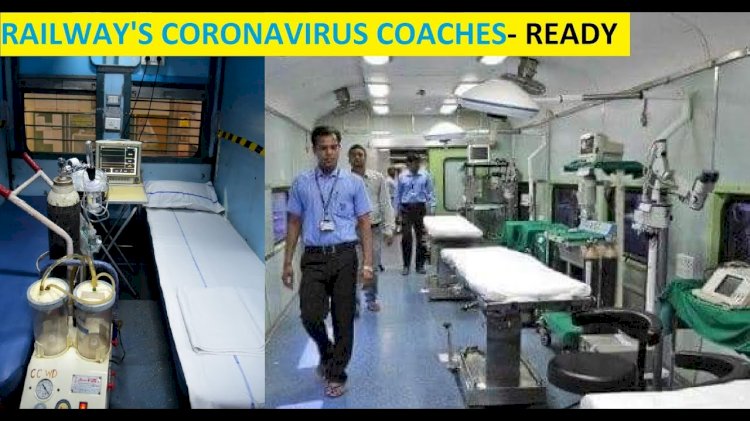 NEW DELHI : The government has earmarked 215 railway stations for the deployment of railways’ isolation coaches to be used as 'COVID Care Centres' for suspected or confirmed patients categorised as mild or very mild cases.

These stations will be deployed across 23 states and Union Territories, a health ministry document has stated.

"Considering the possibility of increase in cases of COVID- 19, a view is taken to utilize Railway coaches for COVID care centre," the guidelines issued by the Health ministry on Wednesday, said.

According to a 'guidance document on appropriate management of suspect/ confirmed cases of COVID-l9: Railway Coaches - COVID Care Centre' released by the health ministry on Wednesday, the patients lodged in the coaches will be observed for their symptoms and clinical condition.

In cases of deterioration of the symptoms or clinical conditions, they would be referred to a designated centre or hospital for further management, the document said.

Separate coaches for suspect and confirmed cases should be ensured to avoid cross infection, the document says.

The coaches will be spread across all major hotspots in India and cover both the big cities as well as rural, far-off places. The list includes districts currently in the 'green' zones as well as a large number of 'orange' zones. The trains will be deployed at railway stations and will be attached to the nearest COVID hospitals, the government guidelines said.

The guidelines say that in 85 of the stations, railway hospitals will have their own medical staff while in the remaining 130 stations the respective state/UT government may place a request for placing the coaches only if they agree to provide staff and essential medicines at such stations, the health ministry guidelines said.

It also said that railways will provide food, linen and oxygen facilities in the coaches.

Railways currently has prepared 5,150 such coaches and there are plans afoot to convert some of them into 'hospitals on wheels' with facilities to treat all kinds of patients.

Wherever the train is stationed, the rolling stock department of Railways shall make arrangements for watering of coaches regularly, any repairs required in coaches, and also for replenishment of chlorine tablets at the bio-toilet discharge and wherever required, catering arrangements shall be made by IRCTC of the commercial department.

"The Railway Protection Force will ensure suitable security to the coaches, patients and staff working there. Proper signages shall be placed outside railway stations, platforms and near location of coaches to guide authorities and patients to the coaches in a way that they are separate from the general public using the railway facilities," according to the SOPs.

One changing facility for doffing at end of the train on platform where the train is parked is required to be provided, the ministry said.

This facility, if not available as a permanent set up, may be provided as a temporary arrangement by the Railways.

CBSE board exams cancelled or not? Latest CBSE circular clears confusion about pending...

From ITR to PAN-Aadhaar linking: Tax-related tasks to complete...

Aadhaar card update: This service has been discontinued....