Here are the list of Fast charging phones that you can buy under Rs 30,000

Here we tell you some handsets under Rs 30,000 that come with fast charge support: 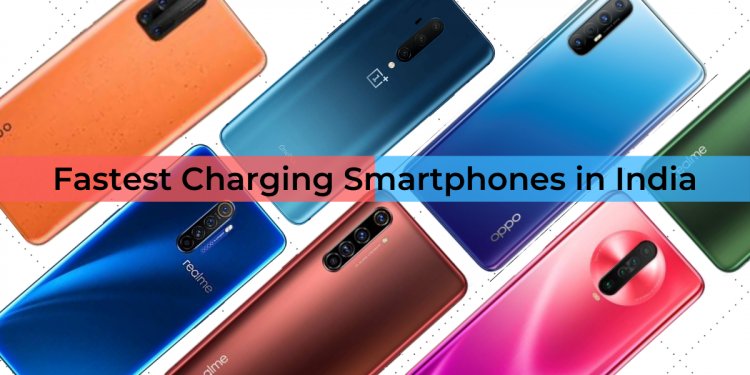 The support for fast charging was initially limited to top-end flagship phones, however, over the years it has become a common feature in affordable handsets as well. Here we tell you some handsets under Rs 30,000 that come with fast charge support:

This recently launched OnePlus smartphone offers Warp Charge 30T Plus fast charging support. The company claims that the device went from 0 to 70% in just 30 minutes. In terms of other specs, it offers a 6.43-inch display of 2400 x 1080 pixel resolution and 20:9 aspect ratio. Powered by the Qualcomm Snapdragon 750G 5G mobile platform, the device is backed by a 4500 mAh battery.

This smartphone from Xiaomi offers support for 33W fast charging. Due to this, Xiaomi claims that the Mi 11X can charge from 0 to 100% in just 52 minutes. Launched in Celestial Silver, Cosmic Black and Lunar White colour options, the Mi 11X comes powered by Qualcomm Snapdragon 870 SoC and offers a 6.67-inch AMOLED display. Backed by a 4520mAh battery, the device has a 48MP+8MP+5MP rear camera setup on the back.

The iQoo Z3 smartphone boasts 55W FlashCharge support, which is said to charge the handset from 0 to 50% in 19 minutes. Backed by a 4400mAh battery, it is powered by Qualcomm Snapdragon 768G 5G SoC. It offers a 6.58-inch FHD+ display and houses 64MP+8MP+2MP rear camera setup.

This Galaxy M series smartphone from Samsung comes with support for a 25W fast charger. Samsung claims that it will reach from 0 to 100% in about 115 minutes. In terms of other specs, the Galaxy M51 houses a 7000mAh battery and houses a 6.7-inch sAMOLED Plus display of FHD+ resolution. It has a quad rear camera setup on the back of 64MP+12MP+5MP+5MP.

This smartphone from Realme offers 65W SuperDart Charge support. This, according to Realme, helps in charging a handset to 100% in 35 minutes. Another claim from the brand is that 3 minutes of charging can deliver 55 minutes of heavy gaming. Backed by a 4500mAh battery, the Realme X7 Pro is powered by MediaTek Dimensity 1000+ 5G SoC and houses a 64MP quad-camera.

This smartphone from Vivo offers 44W FlashCharge support. The handset is said to attain 72% in 30 minutes. It is backed by a 4000mAh battery. Running on Funtouch OS 11.1 based on Android 11, the handset comes powered by Mediatek Dimensity 700 SoC.

This smartphone from Oppo comes with 50W Flash Charge support, which the company claims makes it deliver 5 hours of talk time or 3.5 hours of video playback in 5 minutes of charge. Other specs include MediaTek Dimensity 800U SoC, 48MP+8MP+2MP+2MP quad rear cameras and FHD+ AMOLED display.

Travelers from the affected states coming to UP will be subjected to a rapid antigen...