In a press conference, IT minister Ravi Shankar Prasad said that the new guidelines will keep an eye on the content. 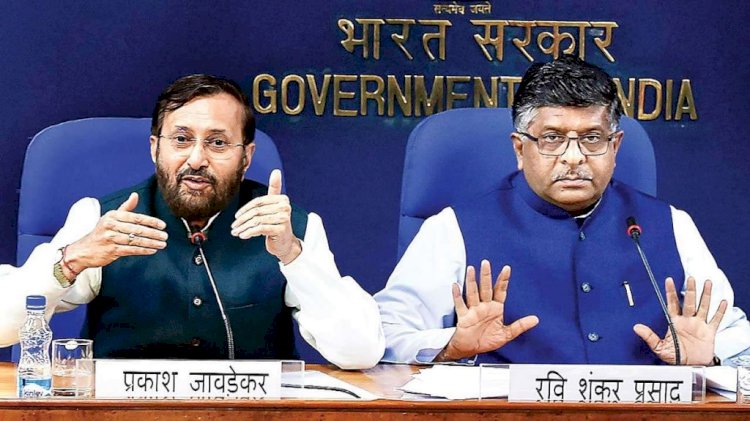 The government on Thursday unveiled new policies for social media and over the top (OTT) platforms.

In a press conference, IT minister Ravi Shankar Prasad said that the new guidelines will keep an eye on the web content/OTT content and empower social media users.

"Social media is welcome for doing business in India, but such content is coming on social media, which cannot be called civilized in any way. Such complaints came to us a lot. A forum should be there for the problem of social media users. Social media is being used to spread hatred. Terrorists are also using social media. Complaints of wrong use of social media have been coming for many years, there is also the menace of fake news.

As per the new guidelines, offensive posts to be removed in 24 hours and the platforms have to appoint a Chief Complaint Officer. The platforms will also have to provide information about the person who first posted the content.

The new guidelines will be implemented within three months.

"Social media platforms upon being asked either by a court order or a govt authority will be required to disclose the first originator of mischievous tweet or message as the case may be,'' Prasad said.

"This should be only in relation to sovereignty and integrity of India, the security of the state, public order, relations with foreign states, or rape, sexually explicit content etc,'' he added.

The rules are aimed at establishing a soft touch progressive institutional mechanism with a level playing field featuring a Code of Ethics and a three-tier grievance redressal framework for news publishers and OTT platforms on the digital media.

"There was demand from all sectors including these two platforms that there must be some arrangement by which a level playing field can be provided to all the media categories. Thus, under the Information Technology Act, 2000 certain rules are being formulated to provide this institutional mechanism for level playing field," a statement from the government said.

Main features of the Rules

The rules establish a soft touch progressive institutional mechanism with a level playing field featuring a Code of Ethics and a three-tier grievance redressal framework for news publishers and OTT platforms on the digital media.

The OTT platforms would self-classify the content into five age-based categories- U (Universal), U/A 7+, U/A 13+, U/A 16+, and A (Adult). Platforms would be required to implement parental locks for content classified as U/A 13+ or higher, and reliable age verification mechanisms for content classified as “A”. Publishers of news on digital media would be required to observe Norms of Journalistic Conduct of the Press Council of India and the Programme Code under the Cable Television Networks Regulation) Act thereby providing a level playing field between the offline (Print, TV) and digital media.

A three-level grievance redressal mechanism has been established under the rules with two levels of self-regulation- Level I being the publisher and Level II being the Self Regulatory Body, and the third level being the Oversight Mechanism under the Ministry of Information & Broadcasting. The rules provide for an effective grievance redressal mechanism for receiving, processing, and time-bound disposal of public grievances related to the Code of Ethics. The self-regulatory body would be headed by a retired judge of the Supreme Court or of a High Court, or by a person of eminence from the relevant field, and can issue advisories to the publisher.

The mechanism is based on the principles of minimum Government intervention; however, platforms should develop a robust grievance redressal mechanism on their own.

Benefits of the Rules

The institutional mechanism would : (i) encourage growth in the Champion Audio-Visual Services Sector; (ii) empower citizens to make informed choices about content,  get their grievances redressed in definite time frames, and protect children; and (iii) help to fight fake news on digital media through a mechanism of accountability of the publishers.

All Ayushman Bharat beneficiaries can now get entitlement cards free

Tax Alert! The last date to verify your pending ITRs is...