The centre said that it has been enhancing the Co-WIN platform app and portal for ensuring smooth vaccination and safety of beneficiaries Harsh Vardhan appealed to people to seek the correct information sources such as the Health Ministry, Press Information Bureau, I&B ministry, MyGov website etc 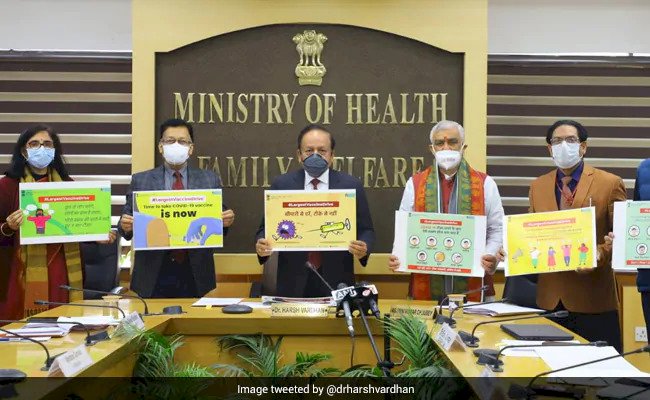 In a bid to tackle the emerging issue of hesitancy and misinformation surrounding covid-19 vaccines, the centre on Thursday launched an Information Education and communication (IEC) campaign. Union health minister Harsh Vardhan calling the situation a “paradox" said that countries across the globe are asking us for access to the vaccines while a section of our own is fomenting misinformation and doubt for narrow political ends.

Affirming that the prominent doctors along with many other healthcare workers within the government and the private sector have taken the covid-19 vaccine, and have returned to their work without any side effects, the health minister said that it is only a handful of vested political interests who are interested in spreading rumour and encouraging vaccine hesitancy among those vulnerable to such propaganda in the population.

The centre said that it has been enhancing the Co-WIN platform app and portal specially designed to drive the coronavirus immunisation programme in the country for ensuring smooth vaccination and safety of beneficiaries.

“We have enhanced the portal. Creation of more session sites, more sessions per site and change in site location now allowed. Planning and scheduling the sessions for an entire week enabled. For enhanced safety of the beneficiaries, tagging of contraindications is being enabled in vaccinator module," said Manohar Agnani, additional secretary, ministry of health and family welfare.

“We have launched a digital media package with impactful messages from key technical experts from the country who have taken the covid-19 vaccine. We are focusing on the messages--Vaccines are safe & efficacious, Do not believe in rumours and misinformation and Critical role on vaccines in controlling the pandemic," he said.

Harsh Vardhan appealed to people to seek the correct information from credible and authentic sources such as the Health Ministry, Press Information Bureau, Ministry of Information and Broadcasting, MyGov website etc.

Commenting on the safety and efficacy of the vaccines, the health minister said that, “All eminent doctors of well-known hospitals have taken the vaccine and praised the exercise for its desired end."

Highlighting the role of the vaccination in eradicating diseases, Harsh Vardhan said, “The elimination of Polio and Smallpox was made possible by large scale immunization. Once immunized, not only that person is not capable of catching the disease, he/she is also unable to transmit the disease to others thus passing on the social benefit to the larger society he/she interacts with."

“This was also the logic of undertaking mass immunization of women and children against the twelve diseases under Mission Indradhanush. Vaccination against COVID will similarly create persons incapable of transmitting the disease and eradicate the disease in some time," he said.

India continues to struggle with increasing covid-19 cases. India’s active cases today stand at 1,92,308. Five States viz. Kerala, Maharashtra, Uttar Pradesh, Karnataka and West Bengal account for 73% of the total active cases in the country. Over 83.84%of the new cases are concentrated in eight States and UTs. Kerala reported the maximum daily new cases numbering 6,815 in the last 24 hours. Maharashtra has recorded 3,015new cases while Chhattisgarh registered 594 new cases yesterday, the union health ministry said. Eight States/UTs account for 83.44% of the 151 case fatalities reported in the past 24 hours. Maharashtra reported 59 deaths. Kerala and Chhattisgarh follow with 18 and 10 new deaths, respectively, the government said. The total tally of covid-19 cases reached 1,06, 11,728 and toll touched 1,54,136 on Thursday.

“India is one of the few countries to halt the march of covid-19 and simultaneously develop a vaccine for COVID. Today, the country is seeing a steady decline in active cases. Around 15,000 daily new cases were reported yesterday, said Harsh Vardhan.