With Mussoorie - the Queen of the Hills - becoming over-crowded, people are now wanting to explore other options. Located just 25 km away is Dhanaulti which is fast emerging as the next big tourist hill station. 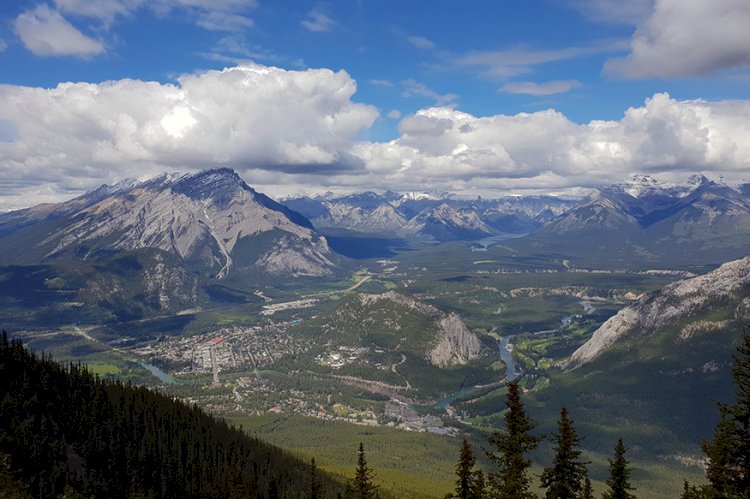 When one reaches Dhanaulti -- a picturesque site in the Garhwal region of 'Devbhoomi' (Gods' abode) Uttarakhand -- one can not but feel the fresh breeze gushing through deodar trees and emitting an earthy, woody aroma. This is when you know you have left behind the hustle and bustle of the crowded city.

With Mussoorie - the Queen of the Hills - becoming over-crowded, it is starting to lose its charm and people are now wanting to explore other options. Located just 25 km away is Dhanaulti which is fast emerging as the next big tourist hill station.

"If one wants to cherish nature at its best, experience fresh air, drink the mineral water coming directly from the Himalayas, then Dhanaulti is the place to be.

"But, say it a boon or a bane, it is fast getting commercialised and we have been seeing a lot more tourists than before. Though they are good for our business, people leave behind a trail of garbage which is very difficult to clean up. It is ruining the natural beauty of the Himalayas," Anil Kumar, owner of Burans Breeze hotel, told IANS.

Kumar, who himself belongs to Delhi, said he wanted to escape the noise and pollution of the national capital and hence built a lodge here from where one can see the snow-peaked Himalayan range.

Decoding the name of his hotel - one of the oldest in the area - he said that 'Burans' is for the Burans flower (rhododendron) that grows here which brightens the entire place with its red colour during spring time, and 'Breeze' is for the strong cool breeze that the place witnesses.

"To attract tourists, we have grown cauliflower, potato, and radish in our gardens and use them fresh in our restaurant," Kumar said.

Another hotelier, Rakesh Garg, owner of Silver Dew, bought land here in 1997 when Uttarakhand was still a part of Uttar Pradesh but established a hotel only recently when Dhanaulti started seeing tourists.

"Back then I didn't know the potential of Dhanaulti becoming a major tourist destination. I bought the land for leisurely purposes but now I see a lot of tourists - from bachelors to families," he said.

Speaking to IANS, Ajay Pawar, who is a native and handles several hotels in the area, said the hotel business here is going good. "People are liking this place because of its peaceful and chilly environment and the privacy that it offers.

"Several people are coming here and demanding rooms or cottages which are isolated and close to nature. They don't come here for luxury, they come here to get close to nature, to hear the birds chirp and for the fresh cool breeze."

"People love this place so much that they want to buy land here but most of it has already been bought and new hotels are coming up there. The prices of land have also shot up in merely last 2-3 years."

Gambhir Singh, a farmer who now runs a confectionery shop, said people are shifting from agriculture activities to work in hotels. Even if a person washes utensils in the hotel, he can make more than what he makes in agriculture, he added.

Painting a gloomy picture for the future of farming on the hills, he said the new generation here does not prefer farming work because of increasing costs, risks associated with it, government's apathy, and hard work involved which don't pay off.

Kishori, manager of hotel Rock Resort, said that tourists demand good surroundings more than comfortable rooms, and hence to attract them, they had have planted apple, plum, walnut, and apricot trees.

"People are very fascinated with the trees, they come and take pictures with them. We also make fresh chutneys and jams with the fruits," he said.

Vinita Chouhan, member of a self-help group based out of Mussoorie, has put up a shop in Buranskhanda as the place has started witnessing lots of tourists. They have also set up shops in Dhanaulti, Mussoori, the Dehradun trade fair, and the India International Trade Fair in Delhi.

"About 100 women are engaged in weaving woollen items like shawls, sweaters, caps, and socks. Another 10-15 women make papad, chips, pickles, and other items," she said.