PM Modi also emphasised that social distancing remains the “biggest weapon” against the virus till a vaccine is found, and suggested that the lockdown may not be lifted entirely. 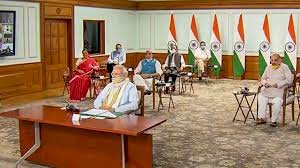 Prime Minister Narendra Modi said on Monday that states will have greater say in determining the extent of restrictions and relaxations after May 17, within a broad national framework while underlining that India faced two challenges— reducing the transmission rate of the coronavirus disease (Covid-19) and resuming public activity gradually. He also emphasised that social distancing remains the “biggest weapon” against the virus till a vaccine is found, and suggested that the lockdown may not be lifted entirely.

In his fifth interaction with chief ministers on the pandemic, according to participants at the meeting, PM Modi said India now had a good sense of the spread of the disease; urged states to carefully examine specific geographical areas to come up with a road map for the next phase of lockdown; highlighted the importance of green zones in restarting economic activity; underlined that the full resumption of rail travel would not be possible; pointed out that India will have to use technology in imparting education; and, more broadly, spoke about how the pandemic will change the world, just as the world wars did; and the new principle of life would be “jan se lekar jag tak” (from an individual to the whole of humanity).

In the backdrop of migrant workers returning home, Modi also emphasised that this will create challenges at two ends — states from where the migrants have left will have labour shortages, and their home states will have to accommodate them economically while preventing the spread of the disease in rural areas.

Over six hours, all chief ministers got an opportunity to speak — on the extension of the lockdown (opinion was divided among the CMs but the majority view was continuing it in containment zones while relaxing it elsewhere); the issue of migrant workers (the dominant concern was the possibility of returning workers spreading the disease); the authority of the states in decision-making (most states sought more autonomy in declaring red, orange and green zones), the resumption of train services (several CMs saw this as an unwise move); and the financial support states now need in the battle against the pandemic. The most stringent criticism of the Centre came from West Bengal CM Mamata Banerjee.

Home minister Amit Shah also spoke at the meeting, emphasising the importance of the Aarogya Setu app in tracking the disease.

In his welcome remarks, according to an official statement, Modi said there was now a clear sense of the geographical spread of the pandemic in India, including the worst affected areas. “Moreover, over the past few weeks, officials have understood operating procedures in a time such as this, right up to the district level.” This understanding, he said, will help the country in having a focused strategy.

“We have a twofold challenge — to reduce the transmission rate of the disease, and to increase public activity gradually, while adhering to all the guidelines, and we will have to work towards achieving both these objectives,” he said.

Modi, according to one of the meeting participants cited above, said that the Centre will decide on future strategy based on consultations with the states, and the states will have to lead the fight. “He said that they will have to decide what new systems have to be in place — but while keeping in mind that the lockdown was the biggest weapon we have till a vaccine is found.”

He asked the CMs to sit with their teams and decide which areas they wanted to keep under a lockdown by May 15; draw a map based on it and provide the logic behind it; and after May 17, the Centre would act accordingly. “Needs are changing in all phases, and so gradual changes are going to happen. We will incorporate the changes that you suggest,” the PM told the CMs, according to the participant quoted above.

The PM indicated that it would not be possible to end the lockdown entirely since there was a need to be alert. “The lockdown is the only way to deal with the virus. But states can modify according to their needs. From May 18, states will decide but there will be a set of common things nationwide.”

A key issue that Modi addressed was of migrant workers. In his welcome remarks earlier in the day, he mentioned how the government had urged people to stay where they were — but people wanted to return home and that was “human nature”. “We have to make sure it doesn’t spread and go to villages, that’s our big challenge,” he said.

In his final remarks, the PM returned to the theme and pointed out that the exit of workers will create a dual challenge. The first was for states that had seen workers leave. “These places are facing a huge labour shortage and so they have to devise a strategy as to how to restart their industry.” The second was for their home states. “The states which they are returning to have their own challenge. They didn’t have jobs and that’s why these people had left. They now have an economic challenge and also the threat of disease. How to deal with workers, how to motivate them to return to work, these are all concerns which we have to fix.”

Modi also emphasised the next set of tasks — restarting economic activity; ensuring that there were no new diseases which spread during monsoon and the need for states to keep their non-Covid hospitals ready; modelling the education system using technology and conducting exams in a manner in which students did not lag behind; and thinking of ways to develop Indian tourist spots at a time when tourism the world over had stopped, to be able to take advantage of post-Covid tourism.

At a time when passenger rail services have been resumed — albeit to a limited degree — and in response to CMs such as Bihar’s Nitish Kumar who expressed concerns that this will lead to the spread of the disease, the PM underlined that not all rail services will be resumed. “We can’t start all passenger trains at the same time. But we have started some limited trains like Rajdhani, which has few stations or is linked to the economic chain. Starting all is not a good idea.”

Among the CMs, the strongest criticism of the Centre came from Mamata Banerjee, who accused the government of playing politics. According to a second participant who attended the meeting, Banerjee said, “We as a state are doing our best to combat the virus. The Centre should not play politics in this crucial time; all states should be given equal importance.’’ She waved papers, and claimed that every half-an-hour, a letter came from the Centre giving directions, and every second day, a central team arrived. “Don’t we have any work other than running behind those teams? We are not a small state but one of the bigger states.”

But the general theme of the meeting was the pandemic and the lockdown, with styles outlining their own experiences and challenges and views on what needed to be done next. Most states wanted the lockdown in the most affected zones, while greater relaxations elsewhere.

But besides the lockdown, states also expressed their views on other issues. Bihar and UP expressed concerns about the returning migrant workers and the challenges they posed on both the health and the economic front, while Maharashtra and Haryana urged migrant workers to stay back.

Odisha, Chattisgarh, Telengana, and Bihar expressed apprehensions about the resumption of limited passenger rail services. So did Kerala CM Pinarayi Vijayan, who warned about the possibility of community spread if trains were made operational without consulting states and its registration data.

Employee compensations likely to be tweaked as govt eyes...

In a huge relief, Centre exempts business up to Rs 40 lakh...

What extension of the tax amnesty scheme, Vivad se Vishwas,...