The idea is to improve the call quality when you are indoors where mobile network coverage may be spotty, and also reduce the load on the network. 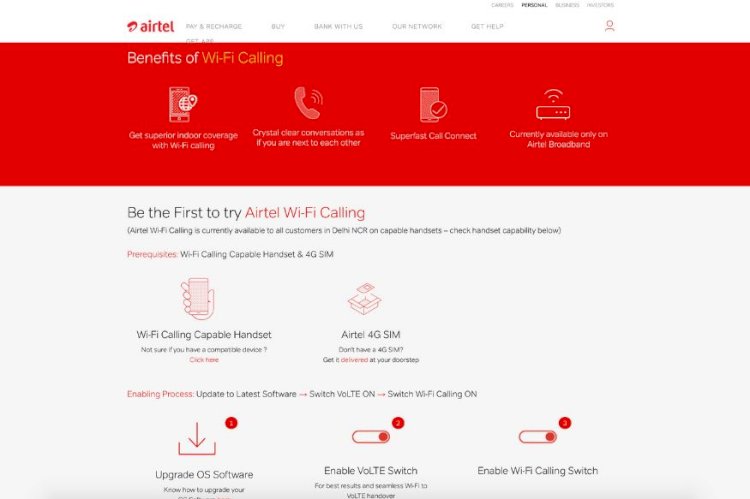 “Airtel Wi-Fi Calling leverages cutting edge technology to enhance the indoor voice calling experience for Airtel smartphone customers. The innovative service uses Wi-Fi networks to create a dedicated channel for voice calls and allows customers to make telco grade calls to any network. This dramatically improves customer experience as one can seamlessly switch to Airtel Wi-Fi Calling,” says the company in an official statement. Airtel insists that any calls made using the Wi-Fi Calling feature remain free of charge, much like the voice calls on the mobile network. The idea is to improve the call quality when you are indoors where mobile network coverage may be spotty, and also reduce the load on the network at the same time by shifting some of the calling load to the Airtel Broadband network. As a user, you simply need to make a voice call from your phone as you always have, and the phone will detect if the network coverage is not optimal and switch the calls to the broadband network your phone may be connected to at the time. When you do make a call, you will not know the difference, except that calls will probably be clearer and lesser chances of drops. However, this feature only works with certain phones right now.

To get Wi-Fi calling to work for you indoors, at home and at work, what you need is an Airtel connection—prepaid or postpaid, doesn’t matter really. And a smartphone that is capable of handling voice on Wi-Fi calls. Airtel says you must update to the latest software for your phone. For Android users, head to Settings and check for the software update for Android on your phone—this option is either in the About menu or somewhere in the main list of options, depending on which Android phone you are using. Apple iPhone users must head to Settings -> General -> About and check for the software update. Once this is done, you must restart your phone (chances are, the software update process will do that for you) and head to the mobile network or mobile data settings on the Android phone and Settings -> Cellular on the iPhone. Here, you need to enable VoLTE and the Wi-Fi Calling options.

So, what exactly is VoWiFi, or Voice over Wi-Fi? “VoWi-Fi simply stands for voice over Wi-Fi. VoWi-Fi is a complementary technology to VoLTE and utilises IMS technology to provide a packet voice service that is delivered over IP via a Wi-Fi network,” is how trade body GSM Association describes VoWiFi. For this, you need to be connected to a Wi-Fi network at the time (it doesn’t matter what Wi-Fi, as long as there is a Wi-Fi that doesn’t have a firewall blocking the calls) and a smartphone that supports network generated voice calls to be switched to Wi-Fi and back. For quite a while now, mobile companies in India have been using the VoLTE technology to switch some of the calls over to the LTE/4G network for better clarity and to reduce the chance of call drops. What this means to you, as a user, is that you will be able to make a regular voice call from your smartphone, even if the mobile network coverage at that location is spotty or fluctuating, and as long as you are connected to Wi-Fi. This could just be the ideal solution for a couple of problems that mobile service providers are facing—the issue of network congestion which leads to failed calls and call drops.

It is not just the clearer calls, but this service will allow mobile service providers to take on platforms such as WhatsApp, Skype and Facebook Messenger, which let users make free calls over Wi-Fi (and mobile data) to users. Airtel users now don’t have to switch to a third-party app to make those voice calls on Wi-Fi, if the mobile network coverage is low or unavailable at the time. This is the logical next step to the VoLTE, or Voice over LTE technology, which mobile companies have deployed for a while now.

Xiaomi Mi Air Purifier 3 Review: There Are Absolutely No Arguments Against it