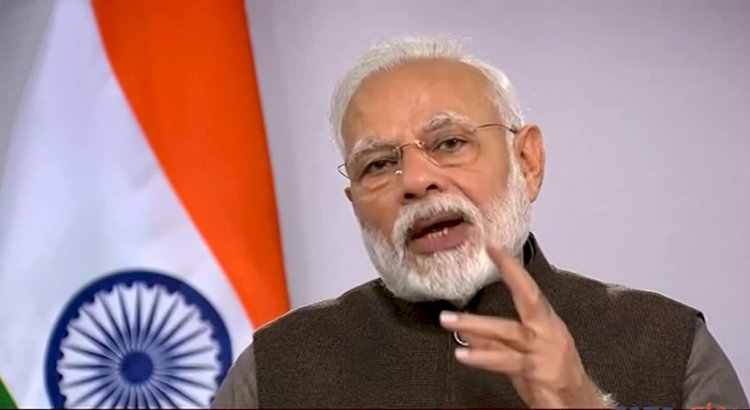 India plans to slowly reopen its economy, while maintaining stringent curbs in covid-19 hotspots, as the government aims to restart industrial activity after a 21-day lockdown and prevent the current upheaval from devolving into a deeper social crisis with millions of poor left hungry and jobless.

Expectations of a massive fiscal stimulus package to revive economic activity and provide jobs and income to affected people have risen with Prime Minister Narendra Modi scheduled to address the nation at 10 am on Tuesday, the last day of the 21-day initial lockdown.

Key sectors of the economy such as farming, agro-processing and household goods, which meet essential needs of people and act as engines of growth, will be gradually opened up with states and district administrations, in coordination with the Centre, deciding on how to return to normalcy in a graded manner, two government officials said.

Prime Minister Modi is set to convey India’s approach to lifting the lockdown and possibly announcing a rescue package, a third person familiar with the development said on condition of anonymity. Economists and business leaders are pitching for a massive ₹10 trillion fiscal stimulus to support people who have lost their livelihoods and businesses on the verge of collapse.

Barring sectors such as aviation and railways, a possible decision to gradually lift the lockdown will hinge on the capacity and preparedness of state, district and municipal authorities to contain the spread of the virus, one of the two government officials said on condition of anonymity. “The lifting of the lockdown has to be in a nuanced way," said the official. Most officials Mint spoke to agreed that the lockdown is unlikely to continue in its present form after 14 April. 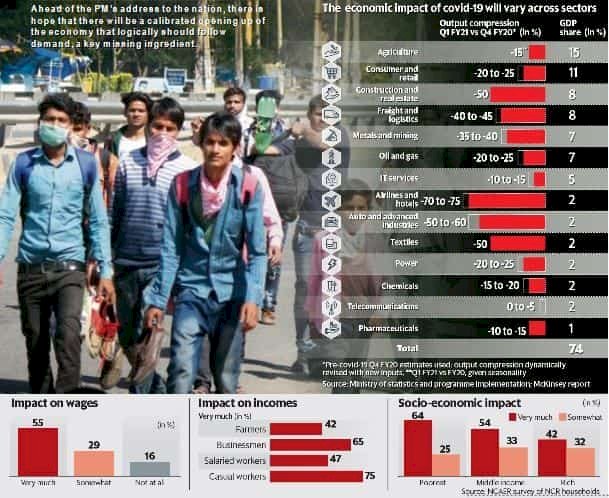 According to policy analyst and political commentator Sanjaya Baru, the idea of lifting the lockdown in a phased manner marking geographic areas into red, yellow and green zones depending on the pandemic’s incidence, is important as continuing with a full-fledged lockdown in the entire country may not be very feasible. “Some kind of opening up in areas where the pandemic’s incidence has not been much should be considered. Along with that, ensuring access to testing for infections is also very crucial," said Baru.

Rajiv Kumar, vice chairman of federal policy think tank NITI Aayog, said in an interview published on Monday that the easing of restrictions on movement has to focus on sectors such as exports and essential commodities more broadly defined to include FMCG (fast-moving consumer goods), where demand has not been derailed by the crisis. Employment generating sectors such as real estate and infrastructure that have a multiplier effect in the economy is also a priority area to be allowed to function, with adequate safeguards, Kumar had said.

India should have a calibrated opening up of the economy, said Rajat Kathuria, director and chief executive of Indian Council for Research on International Economic Relations (Icrier). The country should also ensure that not a single needy person goes hungry and get the weaknesses in the healthcare and social security architecture fixed, he said. “A calibrated opening up of the economy is something we should look at very seriously, using as much technology as possible. The best way is to look at geographic areas as red, amber and green in terms of the pandemic’s impact. There is no point in opening up everything in one go and squander the gains that we have made in controlling the pandemic," said Kathuria.

Maharashtra has extended the lockdown till 30 April but chief minister Uddhav Thackeray assured that there will be relaxations in some areas and tighter enforcement of the lockdown in some other areas. Madhya Pradesh chief minister Shivraj Singh Chauhan too was cited as saying that the next phase of the lockdown will be different from the first one ending on 14 April.

The industry department has asked the home ministry to allow certain industries to operate with reasonable safeguards, even if the government decides to extend the nationwide lockdown.

Electrical, telecom, defence, gem and jewellery units, special economic and export-oriented units may also get the relief if the proposal is accepted.

Industry body Associated Chambers of Commerce and Industry (Assocham) said on Monday that it has approached the government for an “immediate and an impactful stimulus package without getting weighed in by any possible downgrade by global rating agencies." The Assocham statement, citing its president Niranjan Hiranandani, said that considering the pain of the crisis will be felt more in coming weeks and months, it was imperative “for the government and RBI to immediately announce a major package for saving the industry, trade and millions of jobs."

Owners will now be able to talk to Alexa using voice commands in Hindi, and the...

In a major breakthrough in its fight against COVID-19 India got its 1st indigenous...

According to the ministry statement, the person from Delhi travelled to Italy recently,...

The research was published in the JAMA Internal Medicine journal and is the largest...

WhatsApp has warned users asking them to never share verification codes with anyone....

As all the passenger ‘trains’ are canceled till 14th April due to lockdown Indian...